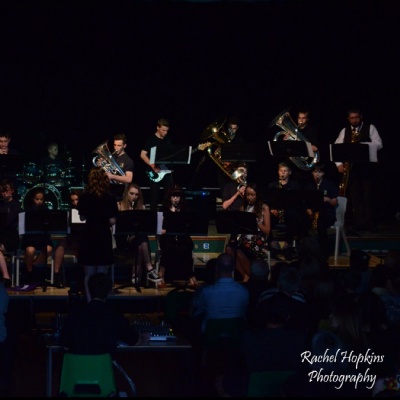 The College's annual Summer Concert took place on the evening of 6 July, and was a spectacular showcase of the students' performance and event management skills. There was a huge range of musical styles from all the acts.

The Friday Band (College wind band) kicked off both halves of the show with a range of well-known pieces, including Instant Concert and Rock n’ Roll Hall of Fame, both of which were medleys of some of the best-known pieces.  Also playing were the College Orchestra, with well-known pieces such as Jurassic Park, and the Brass Ensemble with a very unique rap / brass / funk fusion piece.  In true tradition, the Choir and the Boys’ Choir both outdid themselves again, with hits such as You’re Welcome (from Moana) and Billy Joel’s The Longest Time. From the younger students in the Junior Choir, we heard Human and Riptide, arranged and organised by two year 9 music ambassadors, Daisy Mays and Eva Pascoe.

As well as the large ensembles, there was a variety of duets and solo acts.  These included Harvey (year 11) using a looping pedal, and a series of vocal duets, a flute and trumpet duet, a horn and piano duet and some piano/vocal duets.  These acts included song mashups such as the Shape of You/Cheap Thrills mashup by Jacob Thomas-Hegarty and Emily Rath (both year 10 students) and two songs sung a cappella at the same time by sisters Ellie Petherick-Davies (year 12) and Rosie Petherick-Davies (year 9).

Of course, all of this would not have been possible without the hard work of the music ambassadors.  This group of students dedicated the best part of three days, one day being about 12 hours long including time after school, to set up, help run, and pack down after the concert.  They moved equipment from music to the Main Hall and set up staging.  Year 12 student, Sam Lane, had a crash course in live sound, successfully managing the microphones and the sound desk for the sound checks and the evening concert.  The day after the concert, the group packed down the main hall, returning chairs and staging to their respective departments, returning the equipment to music, and setting it all back up in its original homes.

Sticking to tradition, some musicians were rewarded for their work and commitment to the music department and music.  These students and awards were:

All in all, the Summer Concert was a huge success with a fantastic turnout of around 230 audience members and over 100 students involved in running the show and performing in it. Congratulations to everyone; staff, student, ex-student or audience member who took part in or supported the concert.