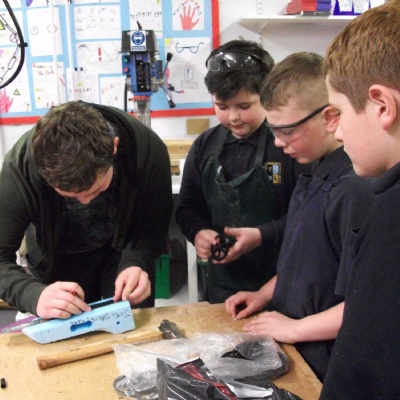 The Bloodhound SSC is a British supersonic land vehicle currently in development. Its goal is to match or exceed 1 000 miles per hour (1 609 km/h) achieving a new world land speed record. As part of the project outreach they have challenged students at primary and secondary schools across the country to create their own rocket cars which will then be raced. The primary and secondary team that creates the faster rocket car nationally will get to go to Africa to watch the Bloodhound SSC attempt to break the land speed record.

Over the last couple of months teams of students from the College have been busy designing and making the perfect rocket car to race in the competition, helped by some of our Sixth Form students. The students have spent a lot of time researching  and considering aerodynamics when designing the shape of their rocket cars in the hope to win and move onto the next round. On Thursday 23rd March Callington Community College will be hosting the Bloodhound project race day for the schools in the local area. You may have seen this same event on BBC Spotlight recently when Sir John Hunt hosted the competition for their local area.