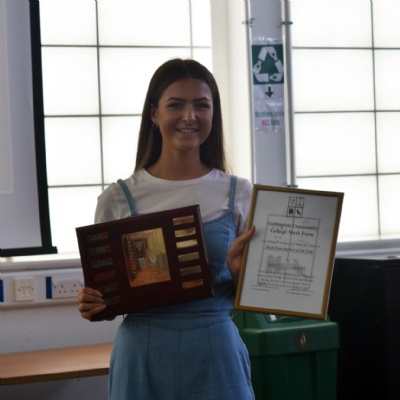 On Friday 28 June the Year 13 students said their final goodbye to the College. After a tremendous amount of work the students put into their exams, they finally celebrated coming to the end of their school life.

Students spent the afternoon in the Sixth Form centre for one final assembly celebrating their work over the past two years. Head of the Sixth Form Student Union, Thomas C, started proceedings with an emotional and brilliant speech, which acknowledged the hard work, commitment and dedication of students and staff during the past two years and recognised how hard Level 3 qualifications have been but this has been made slightly easier by the support and care given by tutors and teachers.

The Year 13 tutors then gave a small speech about their groups of students, who they have supported during their time in Sixth Form and this was followed by one final round of the Sixth Form quiz. It was fitting that the tutor groups that had spent the entire academic year finishing last, would finally secure a win! Congratulations to Mr Hutchins and his tutor group.

Thomas C and Ella N then presented students with a number of subject awards before Mr Yendell highlighted some of the students amazing achievements and presented the annual awards to the following students:

In the evening, China Fleet County Club in Saltash was once again the venue for the Year 13 leaver’s dinner. Students and teachers enjoyed a three course meal, disco and one final speech by Mr Yendell, where he challenged the students to use their talents to go and make difference the in the world. The evening also included a surprise visit from a former England, Liverpool and Tottenham footballer, now turned celebrity. Neil ‘Razor’ Ruddock, who was at the venue for an event but took the time to talk to the students and staff and posed for photographs. Many students headed off into Plymouth to continue the celebrations through the night.

The College would like to take this opportunity to thank the students for their commitment, dedication and hard work during their time at Callington Community College Sixth Form. Individually and collectively they have been a credit to themselves, the College, the Community and their parents and carers. It has been an honour and privilege to have led a very talented group of young people who have embraced the ethos, culture and accessed the opportunities within the Sixth Form.

As one chapter closes, another exciting one opens which will see many of our students attend higher education at some of the best institutes within the UK, other starting employment and apprenticeships and some taking the opportunity to travel the world to enrich themselves and experiences different cultures.